I went to bed early last night. I wasn’t feeling very well, so I had changed my call to stay home so I could rest. A lot of good that decision did me. About 2 AM we awoke to a huge bang. Someone or something was banging on our door. I got up quickly, went out our bedroom door to the porch, and I could see lights and hear a car right outside the entryway. I squeezed past our car parked as it is every night with a couple inches to spare on each side, opened the door within the gate, and looked out as a small Toyota went swerving around the corner. I yelled and it stopped and a couple young men stumbled out, clearly drunk and barely able to stay on their feet. They told me the driver had thought that it was his house and had tried to park in the garage. How he expected to do that with the gate shut is not clear.  Instead he had crashed his car into the wall of the house and had crushed the gate. I got the name of the driver, he stumbled back into his car and drove off.

I didn’t sleep the rest of the night. This sometimes happens to me when I am awoken completely at night. It happens a lot when I am on call in the hospital. I get a call at 1 AM, I need 20-40 minutes to care for the patient, and then I am up for two more hours trying to get back to sleep. At home I find it a time of peace. After making a concentrated effort to sleep (I am not sure you can concentrate your way to sleep) I will get up and make some coffee, resign myself to being up for the night, and read my Bible and pray. It is so quiet, I watch the sky turn to light, and I sit in the stillness praying and thinking and hoping. I feel like God is working on me in these moments . . . I have had a lot of them recently, so I must need a lot of work.  I was blessed with a time like that last night after the excitement of the car crashing against the house. After I woke the kids up, I got out a hammer and pounded on the gate until I could open it enough that we could get the car into the street. And the rest of the day began.

Later in the morning the young driver came by the house and Allison greeted him. He was very apologetic and stated that his own car was totaled. Allison told him that there was grace for him, but that he needed to stop drinking. Our landlord came over, met the driver and arranged to fix the gate. The driver came by three times during the day looking for documents of registration and licensing that were missing from inside his car. Allison assured him that we did not have them. She mentioned that we had not called the police, and no one else had been with us last night. He did not remember much at all nor did he remember who had been with him when he had the wreck, but he did remember that he had actually been drinking with the police, so we would not have been able to call them if we had wanted to. I hope they were off-duty.

Its always a tight fit with the car. That is our bedroom door behind it. 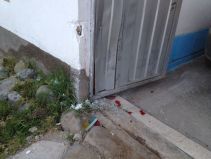 Those adobe walls are tough. The concrete fell apart, but the adobe inside hardly moved. Your should see the back of the car. It is folded like an envelope. 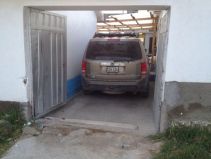 I am glad the car was parked inside last night! 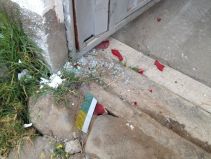 The kids picked up scraps of the lights as souvenirs. 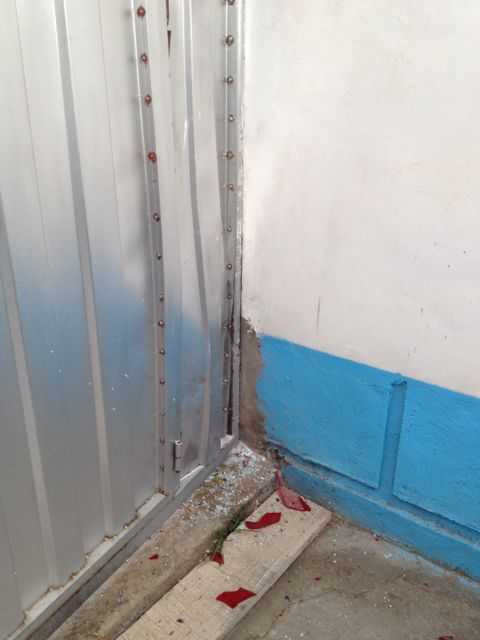 I had to do some pounding on that door in the morning to get it to open for us.

3 thoughts on “A Bang in the Night”