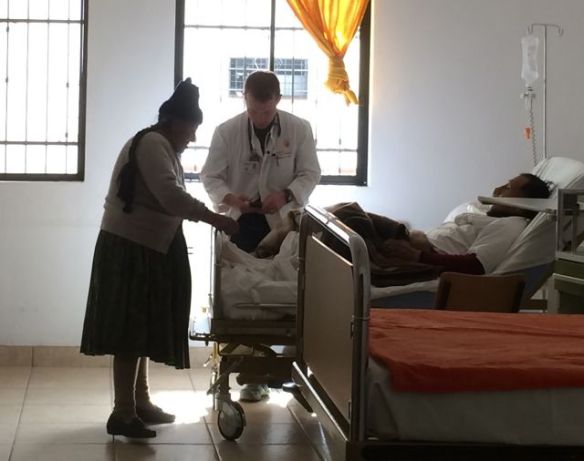 Examining a patient while his Quechua wife makes sure I notice something she finds very important about his toenails.

We are here to serve.  Sometimes it  can be something that you forget, because being a doctor is similar in every part of the world.  People come and tell you their medical problems.  You try and sort through what they are telling you to discover what is really the problem.  For example, everyone here refers to back pain as a problem with their kidneys.  It does not matter that they work on the farm, lifting and carrying things all day.  They are worried that work is damaging their kidneys and causing pains in the back.  They come in to the office and say their kidneys are hurting. Or you have the mother who has a son with cough, but she comes in asking for an ultrasound without describing any of his symptoms to you – they believe greatly in the curative powers of ultrasounds.  The hardest is when a patient comes in with a known diagnosis (they know it, not me) and then proceed to hide all their exam findings until I have done a complete workup, and then they pull out all their studies done the previous week demonstrating the same diagnosis.  I am usually very relieved that somehow I have sorted through the confusion of practicing in a second language to discover the correct diagnosis as well.  And then of course, I am a little frustrated that they were hiding information from me.  Last week, a patient came in with the complaint of leg pain, but what caught my attention was all the blood he had in his mouth and the purple spots he had all over his legs.  This did not seem to be bothering him, as he had recently had a tooth extracted, and he thought is was a side effect of that procedure.  He ended up having a major clotting problem called Idiopathic Thrombocytopenia Purpura. 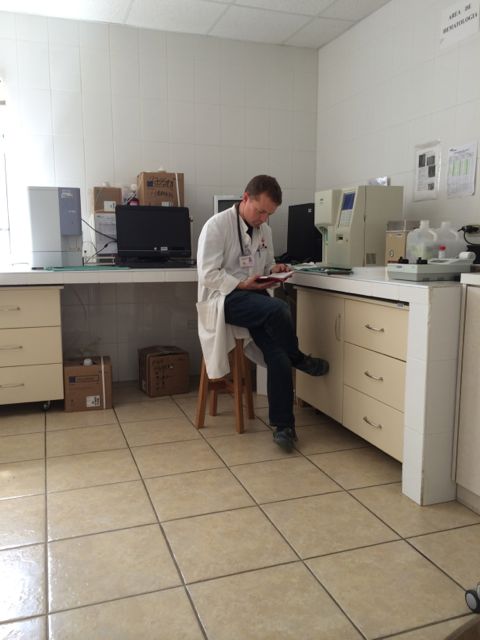 On the weekend we often run the machines in the laboratory to get our blood results. I am reviewing a case and treatment recommendations while I await the results.

Here we treat this with steroids and also with blood transfusions when the patient is actively bleeding.  This patient did not respond to steroids while continuing to slowly bleed, and so we ended up giving him some blood to get this bleeding under control.  I gave a unit which did not react well when we tested it against his blood.  I think, in the end, three people had to come in to find a compatible donor.  Patients like this are a challenge, but certainly it is good to treat severe, diseases instead of trying to convince people they don’t need an ultrasound or to try and pass their test of diagnostic aptitude.

2 thoughts on “Rounding on Patients”