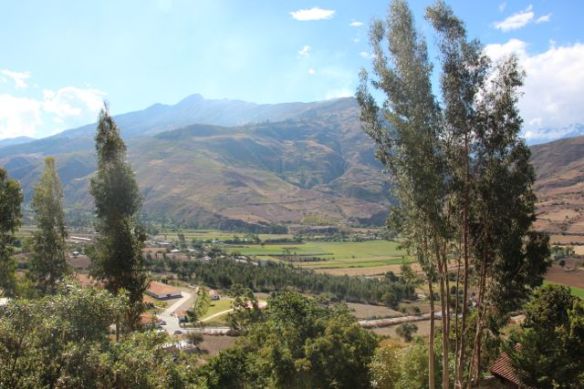 My school is on the left side of this picture, way in the distance between the two tall skinny trees.  It is a long skinny building. The picture is taken from my house.

Dad said that you guys might like to hear about this, so you can put down the bad comments if you do not like this post.  This is a story about a rather awful day at school.  When I got to school it was going fine I guess, until Peter had a stomachache.  We had eaten donuts that Mom had made the night before, and I think that might have been part of the reason.  When I told the teacher he had a stomachache, she thought it was because he was eating potato chips.  I think the teacher thought that Mom was feeding us junk food.  The teachers always give Mom advice on how to feed us.  Part of it could have been jealousy, too, because I know what her lunch is.  Sometimes I find corn kernels in her drawer when I am at the teacher’s desk.  So the teacher had me walk Peter home, and when we got there I was just being lazy because I did not want to go back down the huge hill and across the path to school.  But then I had to head back to school.  On the way to school there are two turns near the cornfield.  One leads to another one of Curahuasi’s suburbs (Parental note – it seems crazy to say this, because Curahuasi is a small town, but there are smaller neighborhoods around Curahuasi that are considered separate towns), and the other turn leads to the school.  But I accidentally took the one that leads to the suburbs, and I walked about 10-15 minutes when I realized I was on the wrong trail and had to head back.  I got back to the correct trail, and there was El Loco.   It feels like I see him behind every bush.  If you read my last post you would know about him, but if you don’t, you can go check on that post.  I wasn’t being super smart, so I decided to walk slowly past him.  I thought walking slowly would make him think that I am nice, but instead he walked toward me and whispered something in my ear.  I thought he whispered something like “Gringo!”  I have no idea what it was, but I am assumed it was something bad.  He was super close to touching me.  So I ran, but then I saw something even worse.   (This is a great place for a cliff hanger, but I am going to go on.)

Dogs!  I have had dogs chase me before, but I usually got away easily.  These dogs thought I was playing chase, and they were fast.  They were faster than dogs a lot bigger than them.  They chased me 50-65 meters, and so I had to jump over some cactus and they ran into them.  When I finally got to the school, I was crying.  I was trying to control it, but the only way to breath was to cry my head off, and it was kind of embarrassing.  After that I was completely scared for several weeks to go out of the house by myself.

If you have any future requests for posts, please put them in the comments.  I want to write about things you are interested in.

We are a family committed to the service of the poor in the name of Jesus Christ. This commitment has brought us to work with the Christian Health Service Corps to serve the poor through medical care and education.