This is the sort of thing that can make your week. On Monday night we were hosting the weekly dessert night. This is a night where the long-term missionaries try and make the short-term volunteers feel welcome in Kijabe. It was the first time we had hosted in a long time on Monday, and every face that came through was unknown. But one big man, with a strong deep voice and a big smile caught our attention. He was looking at our Peruvian pictures, and before long we realized he had been a missionary in Peru. Even better, he had been to Curahuasi. I turned to the kids and said “¡Este hombre conoce Curahuasi!” Their faces lit up and el castellano was filling the house as we all reminisced about our favorite South American country. David could possibly be the “most interesting man in the world”. He was a Peruvian chef who had a television show. He has been a firefighter. And now he is a security expert for Samaritan’s Purse and travels the world doing security assessments. If he ever reads this, he can correct any errors! Between kidnappings, extortions, and latin american television stardom, he has lived a full missionary life. It was a treat to have him in our humble home in Kijabe. We say “¡Bien hecho a David!” 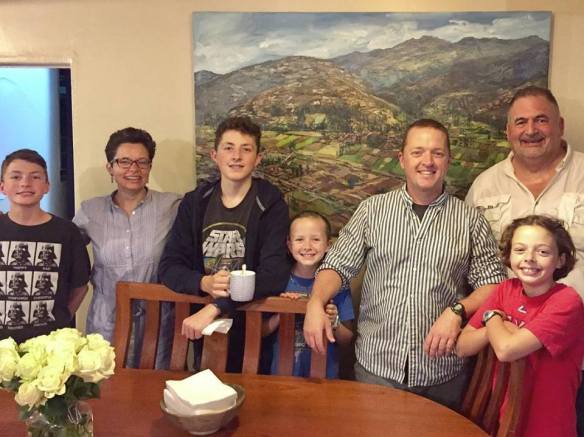 We had to take a picture with David in front of our Peruvian painting of the Sacred Valley near Cuzco. He knew our favorite restaurant in Urubamba.