“This is going to be great,” Sarah exclaimed.

This was not going to be great. Dad was making us go on a four day hike that none of us wanted to go on, except of course, my little sister Sarah, who was very optimistic. 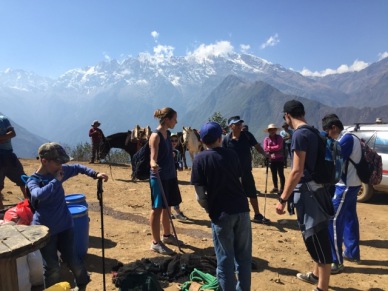 Getting ready to head out. We have just unloaded from the vans.

We climbed out of the van with the rest of the group and started carefully going down a very steep hill that lasted for, what felt like forever, when in reality was just the rest of the day. While we were sliding down the hill, the group separated because some people went slower and some people went quicker. My parents had walkie talkies to keep in touch with my brothers who were ahead of us. When we dragged into the campsite we were exhausted. My mom was in charge of cooking dinner that night. She prepared the best spaghetti I had ever eaten. After dinner we looked up at the brilliant stars. Mom and I climbed into our cozy tent and fell asleep right away.

During the night mom got sick with diarrhea. “I’ll be okay,” she said. “Don’t worry about it.” 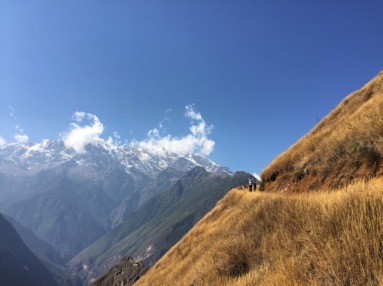 Beautiful! Can you see us standing on the trail?

But as we went down the hill mom had to make many stops behind a bush. Mom saw the walk ahead and felt dizzy. We were considering going home, but mom kept going. David and I went ahead with a young couple, David and Ari. I had known Ari since the day I got to Peru. She worked in the hospital with my Dad. She was very funny and had a unique personality. Then she married my peruvian teacher, David. Peter and Sarah were a group, and Dad and Mom were a group. Mom and Dad were way behind. Dad was being patient and waiting for Mom while Mom was doing her business. The hike was super steep and we hiked non-stop. There were no flat parts at all. It was a very eventful day. When mom and dad finally got to the campsite, we had already eaten.The campsite was super cool. It had lots of wind, it was extremely high up, and it had an awesome view. It was a lot better than the other campsite.

Dinner on the second night in a small restaurant. There are no roads to Choquequirao, and so all the provisions are brought up by mules for the people who live here.

We ate at a typical Peruvian house. We paid them some money and they brought us some food. It was cool because we got to see what it was like to live in a Peruvian house. There were guinea pigs running across the floor, and dirt walls. After that I took an extremely cold shower but it felt good. We went to bed exhausted. But I didn’t sleep very well because in the next tent they were playing games and being very loud, but I woke the next day refreshed and ready to go.

The family looking over the ruins! For some reason Dad thought they were “awesome!”

We hiked the rest of the way to the Incan ruins. They were pretty cool but definitely not worth the hike. At least that’s what I thought. We ate our lunch there, a few granola bars and some fruit, and then started walking to the camp we stayed at the first day. It was miserable on the way down. I thought I broke my toe because it hurt so badly and I cried at one point. I rode a horse for about fifteen minutes and we were at the camp. Ari and David, that young couple me and David walked with the day before, were in charge of dinner. Basically we had raw rice and raw vegetables. They were not good cooks. I imagine they’ll get better at it. I mean they had only been married a couple months. When I went to use the restroom it was very disgusting. The toilets weren’t flushing so they were overflowing with brown and yellow. Mom went to go talk with the manager about the toilets. It took a while for them to fix it. We went to bed exasperated. That was definitely the hardest day yet.

For breakfast the next day we had granola bars, again. We were hiking up the hill that we went down the first day. Mom and Sarah were so worn out that they got on a horse together and were at the entrance in no time. David and Peter went ahead and so it was just Dad and me. I talked and talked all the way until we got to the entrance. Dad would be like “ I need to take a break Annie,” and I would say “Okay,” and we would stop. I wasn’t tired at all! I told dad about “The Ted Wars.” That was when I stole a stuffed animal named Ted from my brother David. He stole it back and then I stole it again and so on. I told him about my favorite part of the hike, about my friends, and practically everything I could think of! Right when we were walking up the final hill we saw two amazing condors soaring above us.

Walking up the hill on our last day!

They were so close I felt as if I could touch them. It was an amazing experience. When we got to the entrance mom gave me some money to buy a snack. The car that was picking us up was very late. Something about peruvians you probably didn’t know is that peruvians are always very late. I ate my snack and talked to my teacher, David. When the car finally came I climbed in ready to get home. We all marveled at how we just did that long hike. I was glad to get home. But if someone invited me to go again, I would say yes.

10 thoughts on “By Annie Caire”