I was in the hospital to see a patient who is hospitalized this morning. She is an interesting case, being one month past the delivery of her daughter, with an overwhelming parasite infection that she probably had for her entire pregnancy. She came in very malnourished and dehydrated. She has responded well to anti-parasite medicine and will likely go home early next week. But the case I would like to talk about is a young man I saw over several days last week. First he presented to me in the emergency room for chronic abdominal pain. He has already had one abdominal operation for gallbladder pain. It is quite rare for young 25 year old men to have already had an abdominal surgery, although it can happen. When I spoke with him and examined him he gave me no real reasons for concern, but he was very concerned. I did lab work as well as an ultrasound of the abdomen and it all came back normal. Because he was so concerned and had already received treatment for gastritis, I decided to proceed with an endoscopic exam of his stomach. The exam was normal. Because of his worry I asked him to see our psychologist. When I walked into my office this morning I found his chart on my desk with the following note. 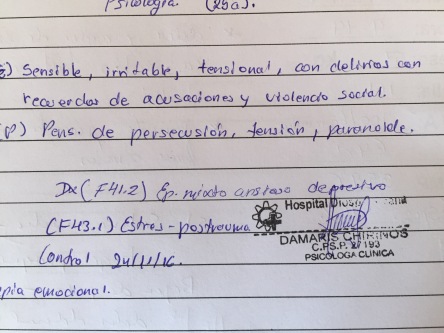 Emotional, irritable, lots of tension, with many memories of accusations and social violence.  Thoughts of persecution and paranoia. Diagnosis of depression with anxiety components and post traumatic stress.

The psychologist confirmed that much of what he may be dealing with is stress related. This is a young man who should be in the prime of his health, feeling invincible physically, who because of family violence in his past now is always with stomach pain which is most likely a manifestation of chronic stress and anxiety. I see so many young men in my clinic who come with vague complaints of abdominal pain. They are convinced that something is very wrong. I need to remember that family violence is endemic in our area. Almost everyone is abused, and even though in some ways it is socially acceptable, the people carry those psychological scars with them into adulthood. And I need to be sure to not miss the classic illness that cause abdominal pain while remembering that there are illnesses of stress caused by abuse that are not so easily cured.