It is a long ways down!

I took this picture at about 12,000 feet elevation on the way to Abancay.  I have to get special permission from the government to drive a car with tinted windows.  That means two trips that last all day to the regional capital of Abancay.  Hopefully I will complete the process on Friday!

The fun is in going downhill fast. The joy is in going slow with your daughter her first time.

Now we are adding radio and TV to the ministries of the hospital. I have heard a saying to the affect that if you are not growing and changing, then you are in the process of dying. If that is true, God’s work in Curahuasi will not be dying soon. This is from the Diospi Suyana website.

The symbol of the radiowaves 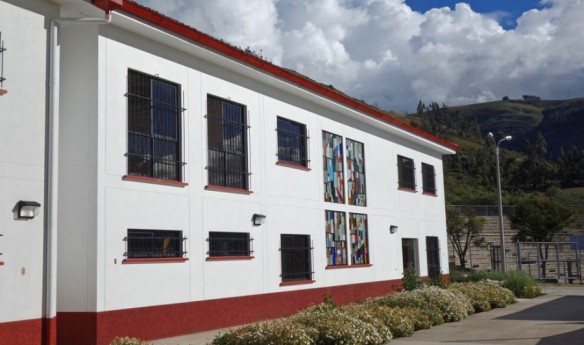 A time plan for 6 months

The building for our radio and TV work is standing. But many details are still missing in the TV-Studio. There is a lot of work to be done before the first broadcast of the first show. The offices should be furnished by the end of May. Today, Thursday, the tables, closets and chairs for Diospi Suyana are being loaded in Switzerland. The installation of the equipment for the Radio- and TV studios will take another 2 months. Most likely we will purchase the equipment in the USA or in Europe.

The radio waves left their mark in the window

At the same time, antennas need to be constructed in Curahuasi and in the east of the state of Apurimac. Possibly, we will be purchasing the land for this purpose.

We are planning with the arrival of our Australian TV-technician, Chris Welsh, and his family in May. His input is very important for the signal transmission. In June, a team of around 10 people will be thinking about the programs embodiment. The plan is to have a Tandem-Team. Each professional will be teaching one further person.

End of July/ beginning of August: The official induction of the Media Center. After that the transmission over FM. 2 months later the TV transmission may follow.

In the fall, during the evening program, we would like to transmit a show over short waves. For that we must also buy the equipment and install it.Every long journey begins with the first step. Luckily, this first step has already been taken some time ago. The opportunities that this new branch of work presents, is worth all the effort. 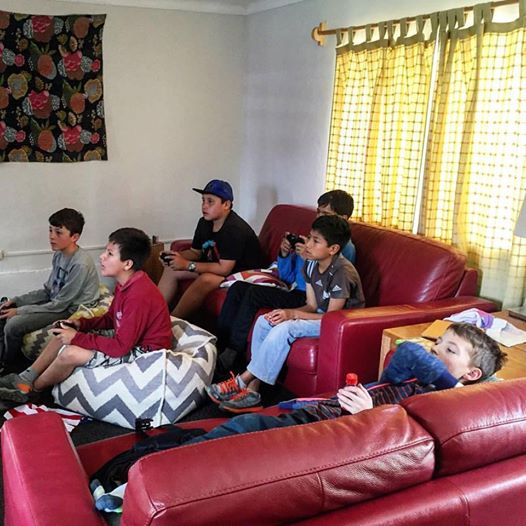 Almost every Friday afternoon our living room is full of boys playing the video game “Halo Reach”.  In this game they have the option of going on campaigns to destroy the violent invading aliens, or they can choose to play a game where they each take a controller and try to kill each other.  Guess which one they choose.  If you guessed the option to kill one another, you are correct.  I would guess that anyone who has boys would have guessed the latter. There is something about boys and violence that often, if not always, goes hand in hand. And I think one of our jobs as parents is to direct this violence to the good.  While the instinct may be to say “No” to violent games and give the commendation to”Be Gentle” or “Be Nice” (gentleness is a fruit of the spirit), maybe instead we should redirect and say “Be strong for the weak” or “Be courageous for God” or “Protect” or “Do courageous things for the gospel”.

In the magazine “First Things” the article “Killer Instinct” takes on the natural tendency toward destruction in many boys. I identified with the author as I thought about how recently Peter had some homemade fireworks explode in his fingers as he was using a toothpick to try and extract the “gunpowder” from the red caps that produce the loud “POP” in cap guns.  He needed it so he could load the powder into his aluminum foil firework. All he ended up with were blistered fingers and bruised pride. Peter likes to make explosives.  I think it is the spark, the creativity, the noise, and just the curiosity to see what will happen.  As I looked at his fingers I had to resist the impulse to prohibit his violent activity completely while indulging the good instinct to warn him to be careful with explosives. And I came upon this author and thought it was worth sharing. The following is a quote that gets to the gist of the article, but click the link above for more.

What I think I have come to understand about boys is that a desire to commit violence is not the same thing as a desire to commit evil. It’s a mistake for parents to presume that a fascination with the idea of blowing something away is, in itself, a disgusting habit, like nose-picking, that can and should be eradicated. The problem is not that the boy’s hand itches for a sword. The problem lies in not telling him what they are for, that they are for something—the sword and the itch alike. If I had told my aggressive little son not, “Be gentle,” but, rather, “Protect your sister,” I might, I think, have had the right end of the stick. 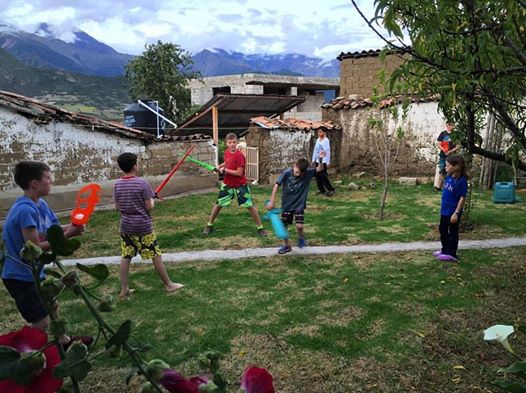 An all out battle amongst a bunch of really kind kids in the backyard.

Like Loading...
“God is like nothing we could have imagined. God is utterly other than us—other in a way we express with the word holiness. Yes, He dwells within each Christian, but He’s not you. He isn’t the same as you, He isn’t a part of you, and He isn’t a “higher” you. Yes, you’re made in His image, but you’re not Him. You’re not the same as Him, you’re not a part of Him, and you aren’t a “splinter” of Him––nor will you ever be. He doesn’t depend on anything else because He is what everything else depends on. He can’t be explained by anything else because He is what everything else must be explained by. Although we can know what He has taught us about Himself, we can never comprehend Him completely because He is greater than our minds. Anything He wills, He can do. He not only holds supreme power but He also uses it. Nothing can defeat Him and nothing can happen contrary to His will. He is also supremely good—light with no darkness. Although evil is real, He detests it and brings it to judgment. He knows everything, He pays attention to everything, and nothing escapes His notice. He’s not just a What and a Who, like me or like you, but one What in three Whos—one God in three persons: Father, Son, and Holy Spirit.[ 2] There is no one like Him. He is set apart. He is what He is, and there was never a time when He was not.”
― from “How to Stay Christian in College“

Like Loading...
“Keep up your spiritual disciplines. What I mean is daily prayer, frequent Bible study and worship, evangelism, service to others, and constantly reminding yourself of the presence of God. If you stay focused on Christ, He’ll make even the desert bloom.”
― from “How to Stay Christian in College“

Thanks to the faithful leadership of the school, it keeps getting better and better. Allison and I tell anyone who cares that each year is a better year in how the school operates. We have good teachers and committed volunteers.  We just need more!  Here is the latest update from the Diospi Suyana Hospital webpage.

Of course, in Chemistry and Physics

The Diospi Suyana-School offers the students in Curahuasi an infrastructure that is similar to those in Europe and the USA. One of the last missing details is the interior of our science department. We are hoping that the Chemistry and Physics rooms will be completed in 2 months. It is one thing to discuss experiments, but quite another to do them oneself. Today director Christian Bigalke is negotiating a special deal in Lima. We want to wish him Gods great blessing for this meeting.

Today at church we had a baptism.  We do our baptisms at our local swimming pool which is sooo cold! Julia is an older woman who confessed her sins and identified herself as a follower of Jesus. She has been in Curahuasi a long time and already her son and daughter in law are members of our church.  Before the baptism she shared that in the past she drank, argued, and lived an angry life. But as she had come to know Jesus her life was different. She was gentler, had quit drinking, and she was seeing changes in her spouse as well. That is the power of the Holy Spirit.  We cannot see the Spirit, but when it comes into our lives it changes our character to be more like Christ. We are not the same when we are followers of Christ.  We are a new creation animated by the power of the Spirit.

2 Corinthians 5:17-19 Therefore, if anyone is in Christ, the new creation has come: The old has gone, the new is here! All this is from God, who reconciled us to himself through Christ and gave us the ministry of reconciliation: that God was reconciling the world to himself in Christ, not counting people’s sins against them.

We are a family committed to the service of the poor in the name of Jesus Christ. This commitment has brought us to work with the Christian Health Service Corps to serve the poor through medical care and education.