What goes on during a call night at Diospi Suyana Hospital?  I won’t say that last Monday was completely typical, but it isn’t totally atypical either.  It started with Roberto, the hospital gardener, coming in with a very fast and persistent heart rate.  With some medicine I was able to control the rate, and he felt better as I admitted him to the hospital to spend the night under observation.  Roberto does not go to our church, in fact, I don’t think he went to church at all.  However, at the request of the family, our pastor, Agustin, came in and prayed with him.  Our pastor has also worked at the hospital for years, and so he knows Roberto.  I walked in to check on Roberto later in the evening and told him his heart was doing a lot better, and Agustin with tears in his eyes told me that Roberto had a brand new heart and that he had committed his life to Jesus that night.

A gardener at the hospital confesses his need for God with our pastor Agustin (in orange). Coming in to the hospital with your heart beating 200 times a minute will make you reflect on what life is really all about.

Later I get a call from Jael, a nurse and teacher working at the hospital. She tells me that a friend is doing poorly.  The woman to whom she is referring was hit by a car in the past, and her fractures and wounds never healed properly.  This woman lives in an abusive home, with a drunk husband, and several children.  Jael felt compassion on her when she helped take care of her in the outpatient clinic caring for her wounds, and she asked if she could visit her in her home to read the Bible.  On this visit, she noticed that that older woman was not doing well and discovered she had a reinfection of her leg.  Jael brought her in to be admitted and cared for properly.  As this patient is reluctant to be in the hospital, if Jael had not been there, the infection would likely have worsened to the point that she could have lost her leg.

Jael has been visiting this woman in her home to read the Bible.

A woman is having her second baby.  She is in the hospital with her husband and first son.  As I walk quickly down the hall to attend the delivery, I notice Harry holding this young, but older brother in his lap, reading and singing and comforting him while his father is in the delivery room with the laboring mother.  Later I found this same young boy asleep in Harry’s lap.  A good nurse knows how to love their patients.  Caring for people is always more than just medicine. 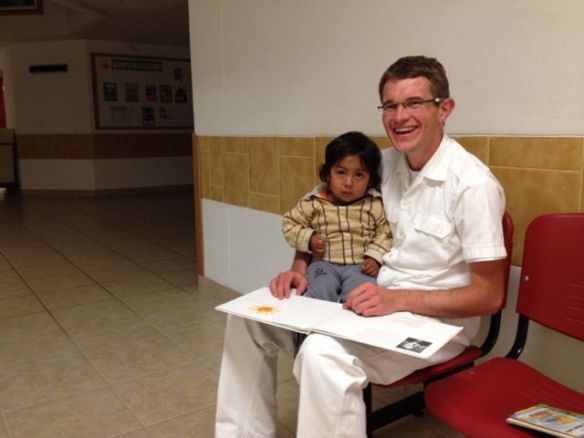 Harry holding this young boy while his father is off attending to the mother while she has a second baby.

The night takes a turn for the worse when a young patient suddenly cannot breath.  He had surgery earlier in the week, and for some reason tonight he cannot maintain his level of oxygen.  I consider all the possibilities . . . a blood clot to the lung, a post-operative pneumonia, volume overload, or too much liquid in the lungs, problems with the heart?  I transfer him to the ICU and an x-ray is done.  His left lung is full of liquid.  With the help of the whole medical team he is cared for and the liquid and blood is drained from his thorax.  He is left in critical, but more stable condition. 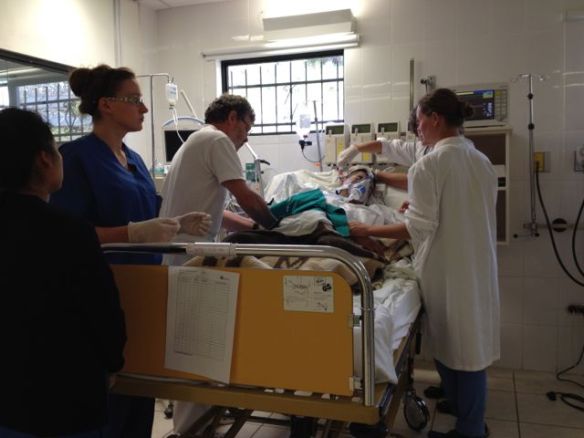 Getting fluid off the lung with a by putting a needle between the ribs. 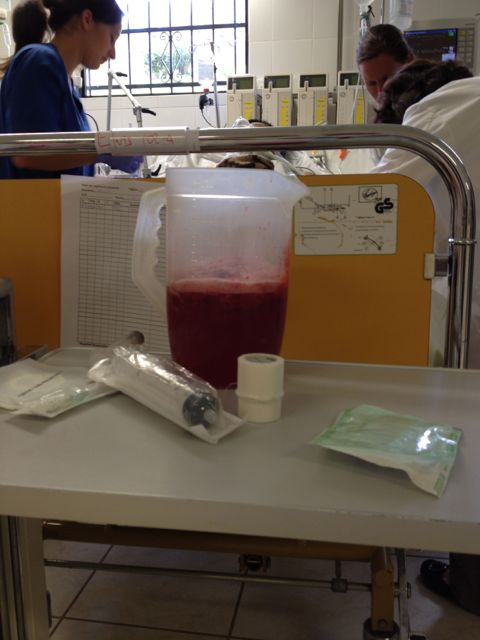 Blood and water from the patients lung.

A night not unlike many others, and full of the grace of God!

1 thought on “A Normal Night at Diospi Suyana Hospital”