Here are some of his thoughts after his visit to the US for the month of November.  The pictures make me homesick.  Not that either of those pictures reflect what Texas looks like, but because they remind me of the diversity of the land which reminds me of the diversity of the people.  There is nowhere like the “melting pot” of the US.  (As an example, try and describe a typical American and what they look like . . . impossible, but a typical Peruvian or Kenyan is a little easier!)

With a nice surprise at the end

The tour of the United States has ended. It was a packed trip with 58 appointments, including 25 radio and television interviews. More than 8,000 miles were traveled as I passed through 25 states.  There were many encounters with those who had a genuine interest in the history of Diospi Suyana.  Four-hundred forty books about the “Miraculous story of the Diospi Suyana Hospital” changed hands.  It was cold in Michigan and New England, warm in Florida, hot in Los Angeles, and quite rainy in San Francisco.

I crossed the Mississippi river on November 17, then I drove through the endless expanse of Texas the next day. Last Tuesday night I traveled over the Rocky Mountains, encountering snow and ice. In the morning I went through Utah and on to Nevada.

During the days in Texas, I was informed of a freelancer who wanted to learn more about Diospi Suyana. Last Friday in the morning I reached the journalist by phone.  I called from a hotel in Loma Linda.  “Mr. Michelson, I am in southern California, where in the US do you call home?”

“I am in Riverside, half an hour away from you!”  he replied.  Forty-five minutes later he was sitting in my hotel room and heard the story of the “hospital of faith.”

What will result from these many contacts is in God’s hands.  Many have been praying for a fruitful trip.  To all these friends I send a heartfelt thanks. 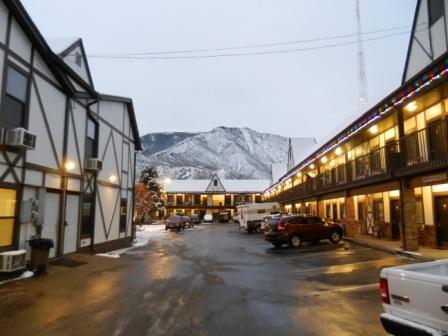 Early morning in the Rocky Mountains. A Christmas atmosphere. Now I start the 600 miles through the southwest, for at 6:00 PM the next lecture in Las Vegas is scheduled.