David went with his class on a school overnight trip.  David is in the sixth grade, and at the end of the sixth grade year, the kids are promoted to secundario.  This is a big deal, and all across Peru, the sixth graders go on a promotion trip.  Our fine young students went camping a couple hours away.  During the trip they slept in tents, ate around a campfire, went whitewater rafting, and in general had a good time.  They told ghost stories (which David said did not scare him because he did not understand them well enough to be scared) and in general had good camping fun.  Our house was empty without our gifted conversationalist.  David was a bit nervous before the trip, wondering how he would do with his language skills, but he did fine.  His ability to communicate in Spanish is really remarkable.  I am so impressed with how all the kids are adjusting (I think sometimes Sarah does not know when she is speaking Spanish and when she is speaking English).  It is not easy what we have done to them.  Can you imagine being sent to work or school in a language you do not know?  And then you are expected to learn it by just hearing it a lot.  Well that is what these kids of ours are doing.  There is no Spanish as a second language class to help them along.  They are on their own.  And they are doing it!  Kids are incredible in their ability to learn languages.  If I was put in this situation, I would sit all day in class, and probably never learn one word.  It is just so much harder for adults.  David is doing well, he remains upbeat despite the challenges, and we are really proud of him.  I am nervously excited to see what the secundario will be like for our path-blazing oldest son. 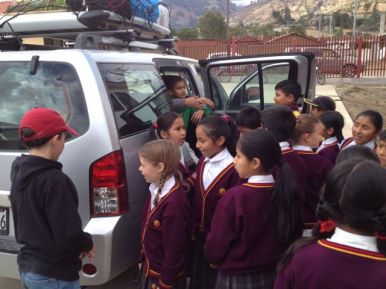 The third grade class came to sing a song and wish them well on their trip.

David and the boys heading out of town.

All the kids missed David, and were glad when he came home. 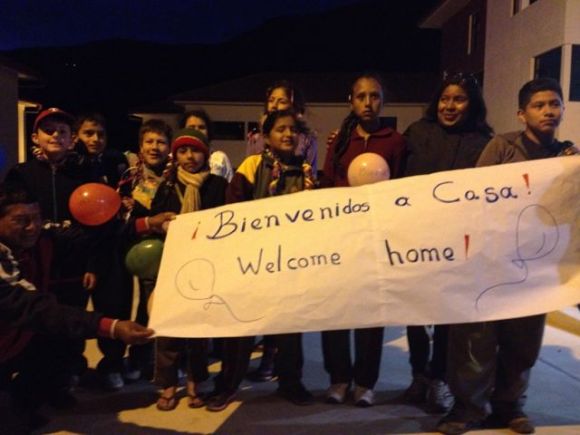 The parents welcomed their kids home with a sign and firecrackers.