Last sunday, as we were going to church, we arrived at the Plaza de Armas where we usually park our car. On arrival we noticed lots of decorations, pictures in dyed wood shavings on the ground surrounding the entire square. As we looked around we saw that many institutions, especially the schools, were represented in the pictures. Of course we had no idea what was going on or what was planned (there seems to be something going on all the time, and we are often surprised by unexpected explosions or fireworks or are sprayed with water guns when not expecting anything). The Plaza de Armas hosts celebrations throughout the year, and especially during the school year when there is a parade every Sunday. As we walked around admiring the pictures, I ran into one of the nurses from the hospital and she told me it was to celebrate El día de Corpus Christi; that is a celebration that the Catholics have in which they recognize that the actual body of Christ is miraculously in the Eucharist. In the past these pictures were done in fruit, but as the crops are not as big anymore, and they have to sell more of their produce to make money, they have switched to dyed wood chips. I think seeing it in fruit would be very interesting, but it was quite impressive in wood chips as well. 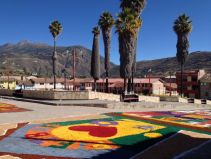 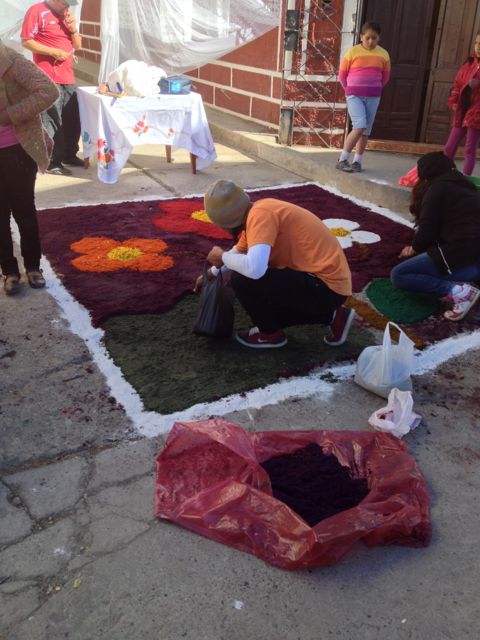